We the undersigned citizens of the country, express our concern with the initiation of contempt proceedings against human right activist and advocate, Mr. Prashant Bhushan, by the Supreme Court of India, in respect of two of his tweets.

In the past few years, serious questions have been raised about the reluctance of the Supreme Court to play its constitutionally mandated role as a check on governmental excesses and violations of fundamental rights of people by the state.

We urge the Hon’ble judges of the Supreme Court to take note of these concerns and engage with the public in an open and transparent manner. The initiation of contempt proceedings against Mr.Bhushan who had articulated some of these concerns in his tweets, appears to be an attempt at stifling such criticism, not just by Prashant Bhushan but by all stakeholders in the Indian democratic and constitutional setup.

Therefore in the interest of justice and fairness and to maintain the dignity of the Supreme Court of India, we urge the Court to reconsider its decision to initiate suo-moto contempt proceedings against Mr. Prashant Bhushan and to withdraw the same at the earliest.

Curbing Bhushan’s freedom of expression is all the more problematic as prosecuting him indirectly encourages...
Read More

Scandalising as contempt: On proceedings against Prashant Bhushan

Time to revisit the idea of ‘scandalising’ in contempt law, usher in judicial accountability
Read More

Dissent, contempt: Supreme Court is too big an institution to be undermined by one man’s criticism

The power of courts to initiate criminal contempt against critics has been curbed by judges themselves in Western jurisdictions.
Read More

Democratic Questioning of Judicial Accountability is not Contempt
Read More

The Supreme Court has broad shoulders. By convicting Prashant Bhushan for contempt, it diminishes itself.
Read More

Neither scared, nor silent: An explosion of outrage

Within hours, the two tweets that had offended the court were dug out and re-posted by many
Read More 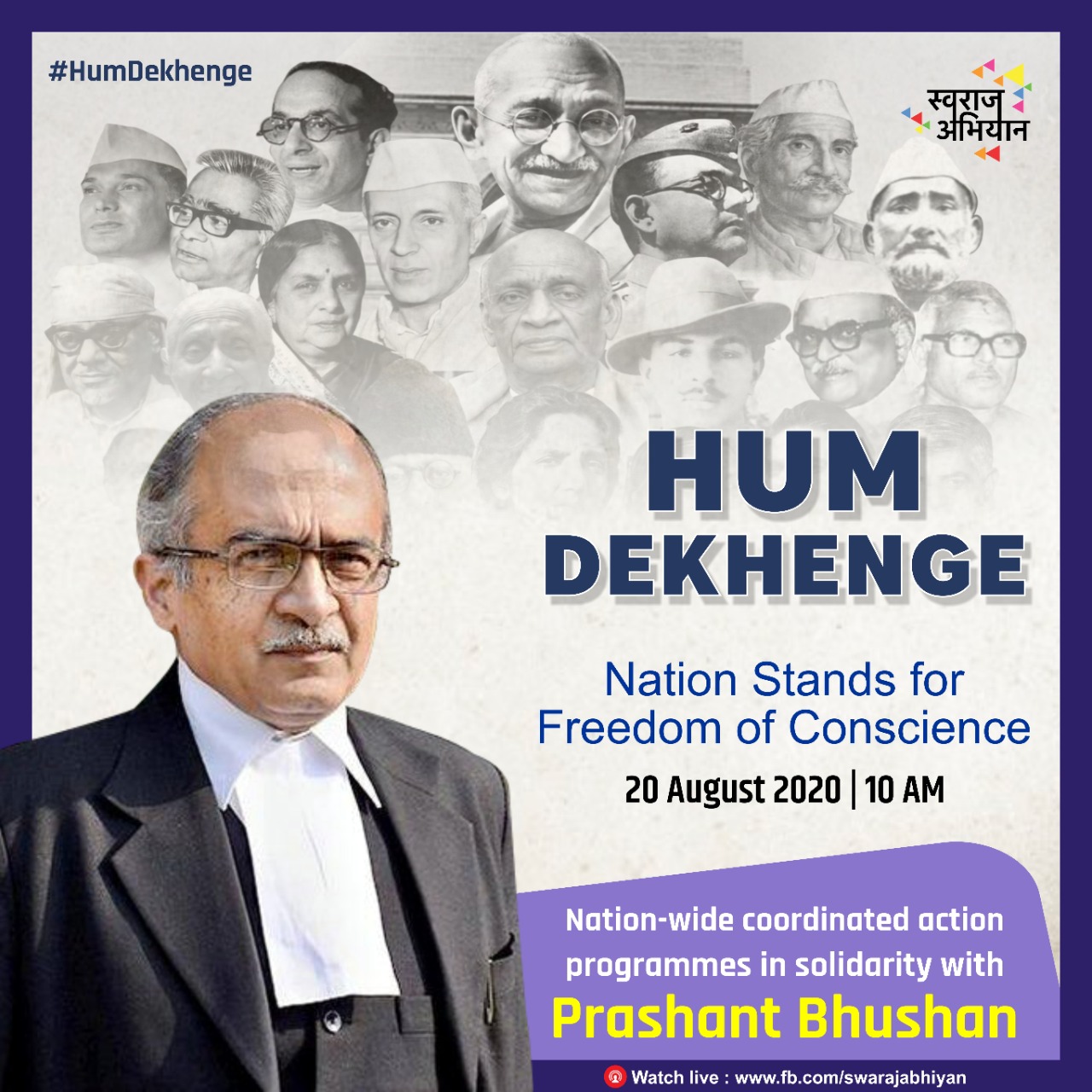 On 20th August 2013, the voice of rationalist thinker Dr. Narendra Dabholkar was silenced forever. On 20th August this year, the Supreme Court plans to sentence Prashant Bhushan for contempt of court. The legal fraternity, human rights movements and indeed ordinary citizens have risen against this judgment that would end up silencing all voices of dissent in the country. Let us all come together on 20th August to watch what happens in the court and stand with Prashant Bhushan at this historic juncture. Let us resolve that our hard-earned freedoms will not be surrendered. Hum Dekhenge!

SC contempt notice an attempt to stifle criticism: ex-judges, others

In a significant development, the statement in solidarity with Advocate Prashant Bhushan that was released on Monday with 131 signatories...
Read More
Live Law

Why I Defend Prashant Bhushan’s Right To Offend

There may be issues of national importance, sovereignty, and security where a contrarian view against national consensus is not acceptable. Otherwise, the right to dissent is at the heart of a democracy.
Read More
Outlook

My Lords, this petition against you is for the contempt of the Constitution

The apex court was right in recently saying that the rebel Rajasthan MLAs have a right to dissent. How then, in the same breath, can critics of judges be called contemnors?
Read More
New Indian Express

The present contempt proceedings, not to mention the revival of 2009 proceedings, are nothing but an attempt to threaten Bhushan – a fierce critic of the court and its judges – to remain silent.
Read More
The Wire

Bhushan refused to apologise for his tweets stating that it fell within the domain of free speech...
Read More
Hindustan Times

Prashant Bhushan, The Question Of Contempt, And Motorcycle Diaries

We have all known that the personal is political for a very long time. But when it comes to institutions, there is a sharp distinction between the two. The institution of the judiciary is a constitutional one.
Read More
Bloomberg Quint

Facing charges of criminal contempt over his remarks in an interview to Tehelka magazine in 2009, Advocate Prashant Bhushan has told the Supreme Court..
Read More
The Indian Express

Why I look forward to Prashant Bhushan’s contempt case hearing, if it’s full and fair

The decision by the Supreme Court to revive the 11-year old contempt case against Prashant Bhushan will finally answer long-pending questions about the functioning of the Indian judiciary.
Read More
The Print

Former Supreme Court judge, Justice Kurian Joseph, has suggested that there should be a provision for intra-court appeal in verdicts..
Read More
Live Law

For more than a hundred years, POTUS has been sharply critical, from time to time, of SCOTUS – and yet constitutional democracy has not been destabilised.
Read More
The Wire

The case against Prashant Bhushan, a public interest lawyer who criticized the Supreme Court and its chief justice in tweets, was seen as a test of free expression in the world’s largest democracy.
Read More
The NewYork Times

Indians have been riveted by a courtroom face off between a prominent lawyer-activist and the country's Supreme Court, writes the BBC's Geeta Pandey in Delhi.
Read More
BBC News

The ICJ today expressed its concern regarding the 31 August 2020 and 14 August 2020 decisions of the Indian Supreme Court...
Read More
ICJ

A progressive section of Indian-Americans has decided to self-impose a fine of one dollar in solidarity with senior advocate Prashant Bhushan who was convicted by the Supreme Court for contempt and fined Re 1.
Read More
The Tribune

The case against Prashant Bhushan, a public interest lawyer who criticized the Supreme Court and its chief justice in tweets, was seen as a test of free expression in the world’s largest democracy.
Read More
The NewYork Times

Prashant Bhushan: “People Must Realize What Is At Stake”

In a wide-ranging interview after being held guilty of criminal contempt of the Supreme Court, lawyer Prashant Bhushan discusses how attacks on critical thinking, scientific thought and peddling of fake news...
Read More
Article 14